PN designed and manufactured a display to highlight the luxury product, a watch valued at over $40,000, using fabrics and materials with a high-end appearance. The outer packaging mimics the shape of the box itself. 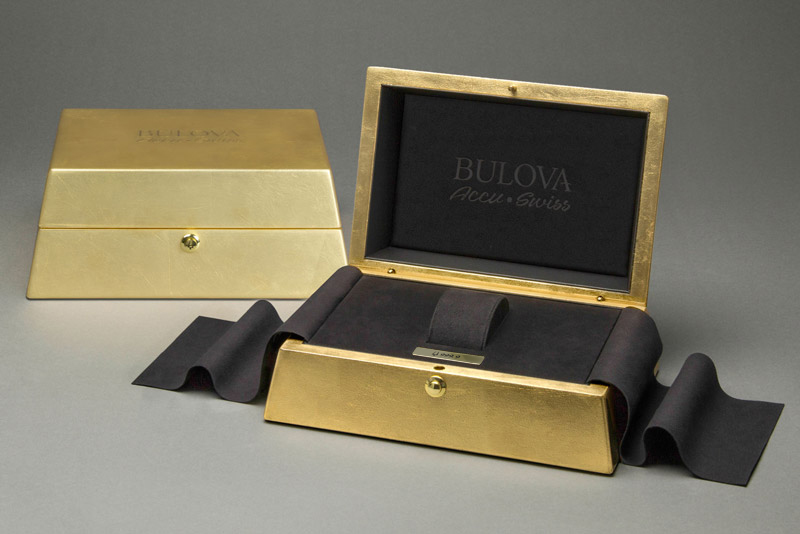 The Bulova Gold Bullion Watch Box has been PN’s most high-end packaging projects to date. Working directly with Bulova Corporation, PN designed and manufactured packaging worthy of the luxury item, a 24kt gold timepiece valued at over $42,000, which was released at Basel World in June 2014.

The specifications for the project were different from any PN had previously encountered. In order to fully convey the unique and special nature of the item, the box needed to be extraordinary. The concept was to make the box mimic a gold bar as closely as possible, in finishing as well as in stature and import. The inside needed to feature inlaid plaques with edition numbers as well as space for the warranty, certificate of authenticity, and polishing cloth, in addition to the timepiece itself.

The finishing required a high level of attention to detail and willingness to experiment to find the right material. Initially, faux gold leaf was chosen, but this was changed to real gold leaf in a later stage to be as convincing as possible. Since real gold bars feature minor imperfections, the gold leaf was carefully crafted to have “natural” imperfections as well.

At Basel World 2014, the packaging succeeded in showcasing the golden timepiece, which became the “showstopper” of the event and was considered a “true museum piece” in presentation. The client was highly satisfied with PN’s ability to create packaging worthy of the luxury item, and the process gave PN a greater understanding of gold leaf options and how best to work with the unique material.

To become the most sought-after Global Provider of Merchandising Solutions to the world’s leading brands.